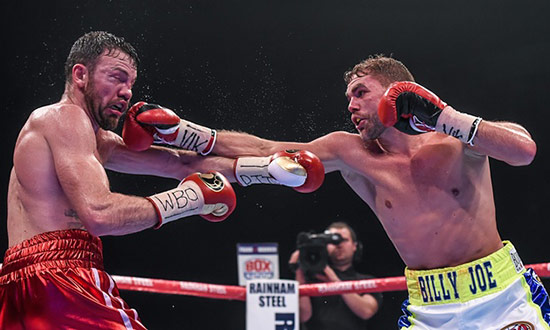 Saunders overcomes Lee – Who is Next?

Saunders now looking at future bouts with the likes of Miguel Cotto and Saul Canelo Alvarez.

Saunders, 26,  dropped Lee twice in 3rd round, but went on to out box the Limerick puncher for the remainder of the fight.

The opening couple of rounds were tentative; Saunders wary of Lee’s power and Lee wary of Saunders’ counter attacking speed. Rounds one and two passing by without so much as a meaningful punch being thrown. It wasn’t until the third session when the bout exploded into action.

Saunders smartly ducked a wild swing from Lee and popped up with a crisp right hook sending Irish crashing to the canvas.

“Boom!” said Saunders watching the shot back after the fight: “I used his power against him.”