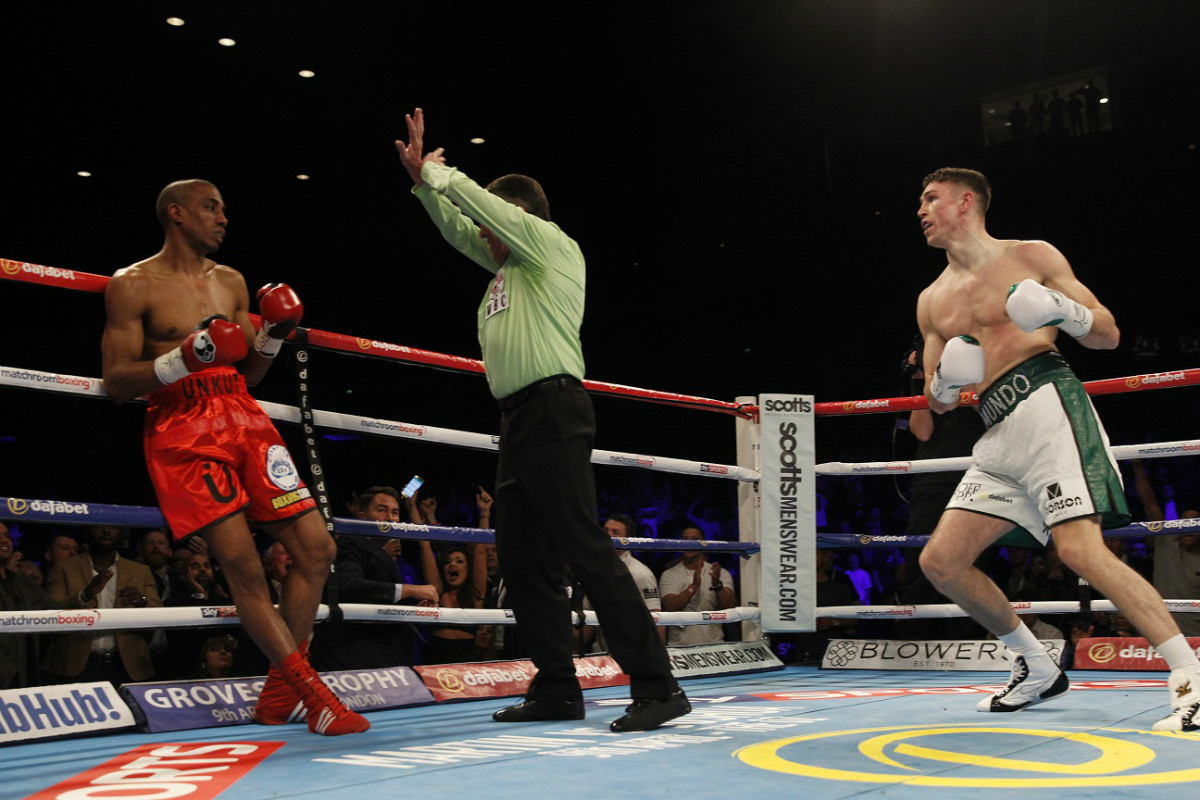 Callum Smith destroyed Hadillah Mohoumadi inside a round to land a shot at the WBC World Super-Middleweight title at the Echo Arena in Liverpool on Saturday night, live on Sky Sports.

Callum became the first of the Smith brothers to win a European title and the unbeaten star, and it’s the third belt that Smith has won in the first round, with Patrick Mendy (English) and Rocky Fielding (British) succumbing in the opening session to the brutal power and smart shot selection of the 25 year old.

CLICK THE PLAY BUTTON ABOVE TO WATCH THE FINISH

Mohoumadi began brightly as he went on the attach from the off, but having cornered Smith the Frenchman felt the force of a left-hand counter that was a sign of the punishment to come. Again, the defending champion attacked the hometown star but when Smith unleashed a trademark stinging bodyshot, Mohoumadi retreated to the ropes and his hands drop, leading to a barrage of unanswered shots that saw the contest waved off after 101 seconds.

Post-fight on Sky Sports, fellow Merseyside man Tony Bellew said of the World champions at 168lbs, only IBF king James DeGale MBE would pose problems to the precocious Smith, who is now mandatory for the WBC belt held by Badou Jack.

“I feel I am getting better and better, hitting harder and getting bigger,” said Smith. “I prepared for a tough night, he’d never been stopped before and he’s European champion, but Joe Gallagher said he would try to come on early so I was ready for that and I hurt him with every counter. I do believe when I put those little gloves on I can hurt anyone.

“I’d like to fight for the World title in September, but if I have to wait then so be it. I’m only 25 and I am improving all the time. Every time I step up I win so why not keep going.”

Promoter Eddie Hearn said that Smith would be ringside in Washington when Jack defends his title against Lucian Bute and DeGale meets his mandatory Rogelio Medina on April 30, live on Sky Sports.

“Callum is the real deal,” said Hearn. “He’ll dominate the Super-Middleweight division for years to come. He’s going to fight for the World title and he’s going to win it. He’s only going to get better and better. Badou Jack won’t want to fight Callum; he just demolished Mohoumadi – Jack won’t stand up to that force. He’s got freakish power and he’s a scary, scary man. He makes the weight easy so let him dominate this division now.

Smith’s devastating win came on a dramatic night on Sky Sports that began with a thrilling two-round shoot-out between Tom Doran and Luke Keeler. The pair met in a rematch of their Prizefighter semi-final last February and Keeler looked to be set to gain revenge for his loss that night when he put Doran down heavily in the first round with a massive right hand.

The Welshman somehow got to his feet and weathered an Irish onslaught, and then fired home left hooks that sent Keeler crashing to the canvas. Keeler managed to survive the incredible opening round and came out on the attack in the second, but another vicious left from Doran just before the halfway stage put Keeler down and took everything out of the Dublin man, and although gamely got to his feet, Doran didn’t let him off the hook and unleashed a barrage of punches that forced the referee intervene after one minute and 37 seconds of the second round, Doran becoming the WBC International champion in thrilling fashion.

That fight was followed by another rematch as Scotty Cardle put his British Lightweight title on the line for the second time against Sean ‘Masher’ Dodd, and once again, the challenger came within a whisker of landing the belt after the fight ended in a majority draw.

The pair served up an edgy affair heading into the championship rounds, but Joe Gallagher in Cardle’s corner was concerned enough after ten sessions to tell Cardle he needed to win the final two rounds to keep his title. Dodd was the man celebrating at the end of the fight, but his joy was short lived as two judges failed to split the pair and one gave the fight to Cardle 116-114.

Rocky Fielding returned to action following his loss to Smith in November, and the popular Liverpool man showed huge heart to edge past Frenchman Christopher Rebrasse via split decision.

Fielding didn’t show any demons from his first round loss to Smith with a good opening session, but Rebrasse soon brought the memories of the three knockdowns he suffered against ‘Mundo’ back in the second round as the Frenchman landed a trio of right hands that sent Fielding down. Thankfully for the hometown man, there was little time left in the round and he was able to use the minute between rounds to regroup, and although Rebrasse continued to catch Fielding throughout, the host was rewarded for his combinations and constant attacks with two judges scoring the fight 114-113 in his favour, with one leaning to Rebrasse by 115-113.

“That’s the most important win of my career,” said Fielding, who picked up the WBC International strap. “I had to dig so deep. He’s very tough – I got up, I shook it off and dug deep to come back. I’ve been working so hard in the gym and having tough spars with Martin Murray, and I used that grit and determination to get through that one.”