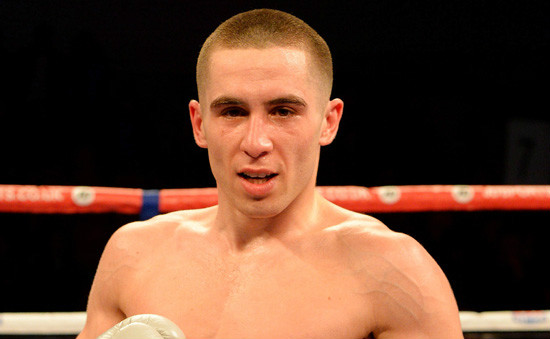 Unsung EBU bantam boss Ryan Farrag intends kicking up a commotion when he opens the defence of his title against French foghorn Karim Guerfi at the Echo Arena in his home city of Liverpool next Saturday.

Glynn Evans found the 28 year old MGM managed champion in buoyant mood when he caught up with him on Thursday.

You entered as a massive underdog when you travelled to Liege, Belgium to confront local star Stephane Jamoye, a former two-time world title challenger, for the EBU belt last October.
What was the secret behind your upset ninth round stoppage win?

I went over to Belgium wanting to stop him. I always want to get ‘em out of there (early). That said, I was winning so clearly. Usually, mid fight, it’s so fast and frantic that you’re never really sure of the scoring but I knew I was getting out of the way of all of his, and landing most of mine. I remember telling my corner: ‘I’m f***ing him, aren’t I?’

Pretty early on, I knew I’d stop him. He was taking far too many big right hands and the expression on his face told me he’d not be able to take much more. I was thinking: ‘The ref needs to be stopping this.’ The towel came in at the right time.

The British bantamweight scene is really buzzing at the moment, with two English world champions. What’s your assessment of the competition?

(Doncaster’s WBA champion) Jamie McDonnell is a very good fighter, a tall rangy boxer but I don’t mind the taller ones. I beat loads in the amateurs including (2012 Olympic gold medallist) Luke Campbell. Unfortunately I’m not ranked with the WBA and think I’ll probably have to fight my way up to the mandatory slot to challenge Jamie.

Obviously (Bristol’s IBF boss) Lee Haskins beat me over three rounds very early in my career in Prizefighter when I didn’t have the patience for such a tricky opponent. Now I understand the pros more, understand you can’t just rush in. It’d be a different fight now, I can assure him.

I desperately want Haskins’ title and if I get a good result on Saturday I’ll have an even better (IBF) ranking and it’ll be more likely to happen.

I think a lot of fans would want to watch a fight between (ex IBF champ and current WBC number six) Stuey Hall and myself because our styles would gel to deliver a thriller. Again a big win next Saturday will improve my rating with the WBC and perhaps we could meet in a WBC final eliminator.

Guys like (current British champ) Ryan Burnett and (Commonwealth king) Jason Cunningham are behind me at the minute. I wouldn’t mind their belts but need to take whatever opportunities are presented at world level first before considering them.

Would you contemplate travelling to Asia to challenge WBC champion Shinsuke Yamanaka from Japan or WBO king Pungluang Sor Singyu from Thailand?

I’d never turn down any world title fight offered, here or abroad, because the opportunity may never come again.

Since I first started boxing the belt I’ve always wanted is the green WBC belt, the Tyson belt! I’ve not seen a tremendous amount of the Jap but he’s tall, quick and strong.

The WBO champ is nearer my height and I don’t think he could compete with me skill wise. He’d suit.

You return to your home city for your maiden defence next weekend. Is that pressure or pleasure?

It’s always a pleasure to be fighting at home. I’ll be very relaxed. I doubt I’ll feel any pressure on me. No doubt the crowd will be hostile to him. That’s not something I encourage because I believe this is a gentleman’s sport and every boxer deserves credit and respect for stepping between the ropes.

You say that but already there’s a bit of needle brewing between yourself and Monsieur Guerfi. Explain!

I took exception to Guerfi messaging me on social media a few weeks ago. I’m not too sure what his agenda was. I think he might even have been trying to be friendly. He wasn’t getting under my skin – I’d not allow him to – but the last thing I want is a friendly conversion with a future opponent. I stopped him in his tracks and told him I intended to punch his head clean off his shoulders!

Has your preparation altered now that you’re a champion?

Yeah, I spent an early week of this camp sparring Jamie Conlan in Marbella and it was nice to get away.

It certainly beats cleaning buckets and getting shit all over your hair and face which used to happen when I was a plasterer! The heat helps bring the weight down and we were very well looked after by the lads at the MGM gym. I’d love a six to eight week camp over there but my coaches have partners and kids over here to consider. I’m the only one in the gym without a girlfriend!

What problems do you envisage Guerfi will pose? Why will you prevail?

He’ll bring good experience from his travels but we’re ready for anything he brings. I believe I’m quicker, stronger and smarter.

I’ve seen a couple of his fights and he likes to mix things up; box a bit, looking for counters but also get involved at times. So I imagine there’ll be times when it’s cagey and times when we’ll trade. If he wants to stand mid ring and take his chance with me I’ll be very happy to oblige. I don’t think he has serious power.

I expect to hurt him early and prove too strong. I always want to put on a good show for the fans, give them a good stoppage to enjoy. I’ve stopped me last three. From now on I aim to destroy every opponent!