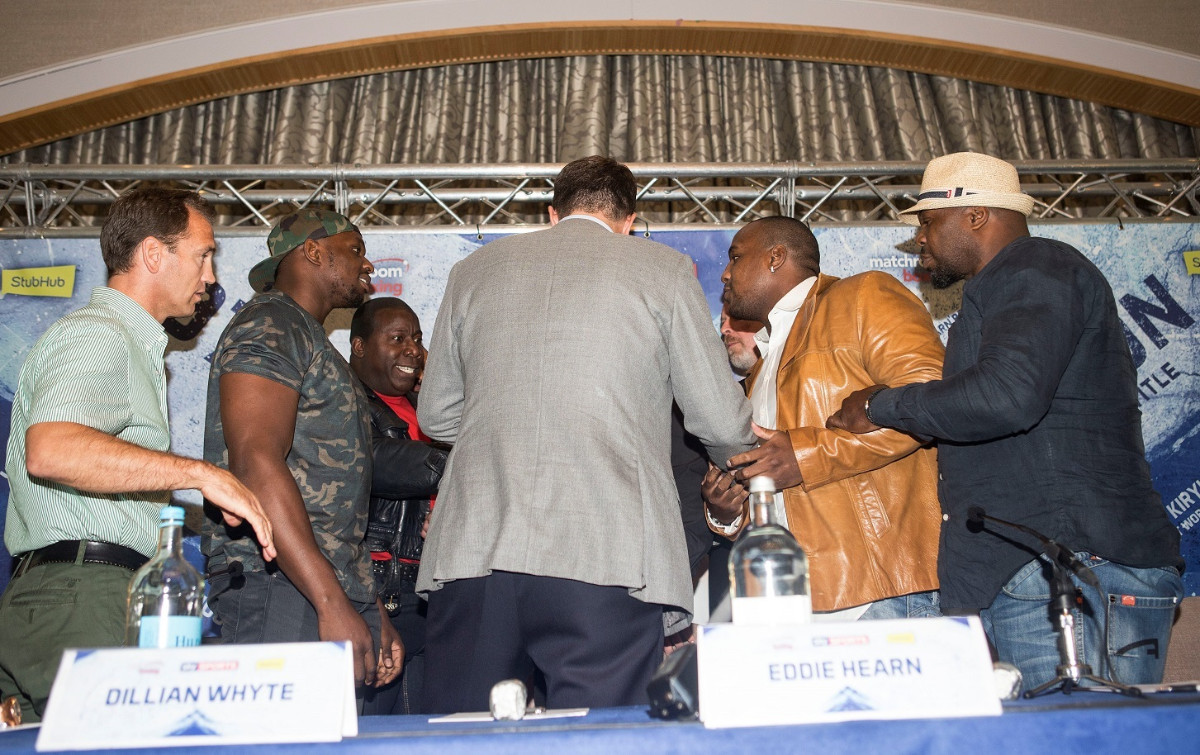 Dillian Whyte and Ian Lewison nearly came to blows at their press conference for their clash for the vacant British Heavyweight title at the SSE Hydro in Glasgow on Friday October 7, live on Sky Sports.

Whyte and Lewison met in central London and sparks flew straight away between the big-hitting Brixton rivals.

After both men confidently predicted devastating KO wins over their local rival, the jibes became personal and security had to separate the pair.

As the tempers cooled and a tense head-to-head pictures were taken without issue, both men staked their claim to the title.

Whyte fought for the Lord Lonsdale belt in December in a pulsating battle with Anthony Joshua MBE at The O2, while for Lewison, it’s a first crack at the coveted strap on the back of his impressive KO win in China in June.

“We’re going to go at it—I really want to beat him up because he talks rubbish,” said Whyte. “I used to think one of these days I’m going to bash his head in, so it’s not long until I tuck him in.

“Ian has been around for years. He could’ve been someone, people used to talk about him.

“He likes eating more than he likes training. His whole team know what time it is—the know what’s going to happen on the night when I am all over him and laughing as I finish him off, we’re going to need a crane to pick him.

“He’s going to run out and try to swing, so it’s up to me what happens in the fight—whether I engage or whether I box him.”

“It’s going to be carnage,” said Lewison. “After the fight he’s going to look bad, and I’m going to KO him inside four rounds.

“It’s a big opportunity for me with a big fight on TV. I thought England wasn’t into public executions anymore? I’m not looking for points, they are for supermarkets. I’m going to KO him, that’s what I am looking for.

“Whether we’re friends or not is irrelevant, we’re in there to do a job and that’s win the belt. He’s got a big profile and that means I can get my name out there and get the big fights with a win.”