Billy Joe Saunders back in action this Saturday in Cardiff 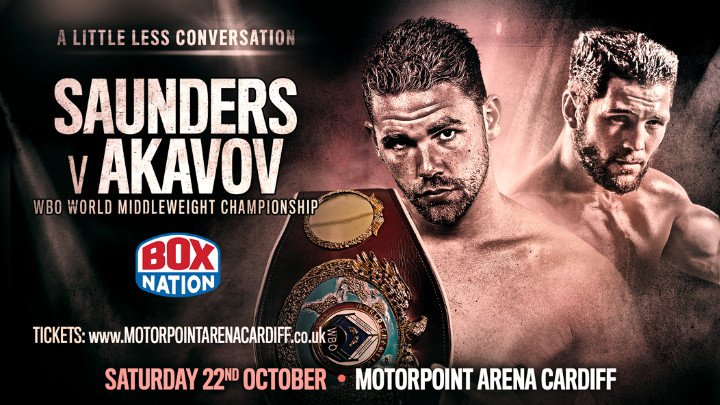 Unbeaten Saunders (23-0-12KO’s) returns for the first time since he won the title against Ireland’s Andy Lee. In a tough contest at the Manchester Arena last December he put Lee down twice in the 3rd and looked well ahead at the halfway stage. He decided to box the second half of the contest on the back foot and made the scorecards closer than needed to be to claim the title via majority decision, scorecards reading 114-112, 115-111 and 113-113.

He’s been inactive since then through injury and Pskov, Russia’s Akavov (16-1-7KO’S) provides his first defence. The southpaw Russian had won 16 from 17 contests but hasn’t shared the ring with anyone of note and Saunders provides his sternest test by a country mile.

Southpaw Saunders has a record filled with impressive wins, in September 2012 he claimed the Commonwealth belt with a stoppage victory over then unbeaten Australian Jarrod Fletcher. He then outpointed Nick Blackwell the same year to add the British title. He started 2013 with a defence over Matthew Hall before taking the unbeaten records of both Gary (Spike) O’Sullivan and John Ryder. In 2014 he claimed the European title beating the unbeaten Italian Emanuele Blandamura.

Then in November that year he had his highest profile clash to date against Chris Eubank Jr at The Excel Arena, London. Saunders started the clash strongly and was way ahead at halfway but increased pressure from Eubank brought the scorecards closer and Saunders edged a deserved but split decision 115-114, 113-116 and 115-113. The Eubank Jr rematch has been widely talked about since and you’d expect it to be near the top of the BT/Boxnation wishlist for 2017.

The fight Saunders has been most vocal about has been a unification against Kazakh sensation Gennady (GGG) Golovkin who holds the WBC, IBF and super WBA middleweight titles. With Golovkins fight with WBA regular champion Daniel Jacobs not yet finalised Saunders could end up in the opposite corner from Golovkin in early 2017.

The Golovkin and Eubank Jr fights go out of the window if he loses against Akavov but Saunders will be a level above his Russian opponent. Using his fantastic footwork the 2008 Team GB Olympian will move in and out of range and hit Akavov at will. Shaking off his ring rust I can see him forcing a mid-late stoppage. And if he does that and stays injury free then 2017 could be a very big year for Billy Joe Saunders.