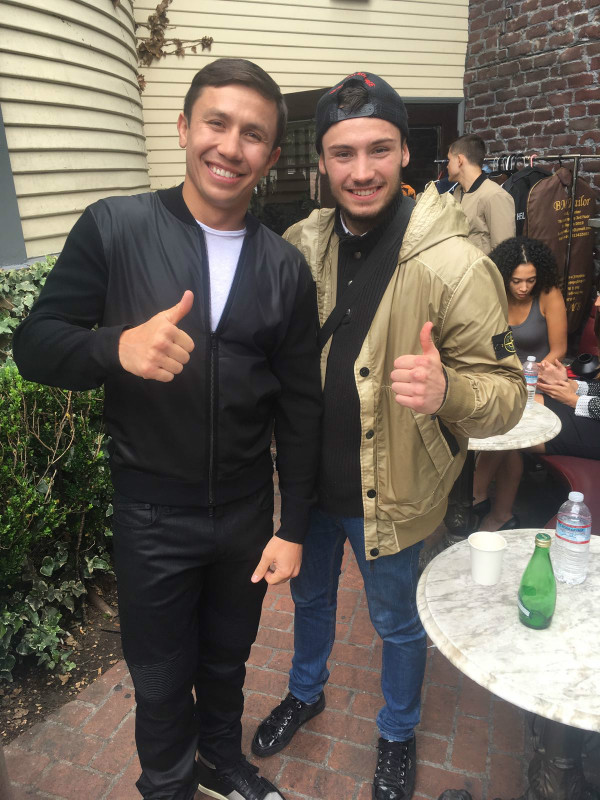 FIVE THOUSAND MILES is a long way to go in order to find yourself. It is said great journies start with only a single step, but some of the more epic examples began with a fall. From power, from grace, from a great height, but a drop so severe that only in profound change can salvation be found.

Ben Hall was riding high, unbeaten, unsullied, unmanageable. Well-travelled veteran Carson Jones brought the prospect crashing to earth and beyond, deep into the abyss, aged just 23 and gazing forlornly up as his world rushed to join him. Injuries and ill-discipline, complacency and, yes, pride, came before this fall. But what followed should prove far more significant.

Hall had switched trainers before, driven more by ambition to move up than a desire to knuckle down. Regardless, the objective was met, Hall’s new connections facilitated a coveted promotional contract with Matchroom and appearances on some big shows; the super-welterweight from Chadwell Heath, the product of a boxing family, appeared bound for glory, but his maturity failed to keep pace with the rapid rise. Runs were swerved, unwise outings enjoyed and distractions abounded.

Continued success and the trappings that accompanied it papered over the cracks. It took Jones, like some kind of sadistic guardian angel, to hammer the message home. Hall left his extended adolescence on that cold, unforgiving Wembley Arena canvas and, in the process, came of age. Where to go now but West and into the welcoming arms of one Abel Sanchez, revered coach of champions?

“I’m a bit gutted to be home,” Hall tells me, his ennui audible over substantial background noise. It’s understandable: Ben has just returned from a month rubbing shoulders with one of the best fighters in the sport, Gennady Golovkin, and throwing hands with top talents like 30-1-1 French super-welter Michel Soro, 31-0 Russian welter Konstantin Ponomarev and 26-1 Venezuelan super-middle Jose Uzcategui. Tonight, as he waits to be seated at the Hornchurch branch of Nando’s, the contrast could hardly be more stark. He steps outside – remarkably, it’s quieter out there – but the chill evening air is yet another painful reminder that Hall is a long way from his new base in the appropriately named Golden State.

“America is the better place to be,” he enthuses, intermittently fending off queries from his fellow diners. “It looks like they train really hard, I’m there for work, no distractions: that’s the mentality. I feel like the loss was a blessing, it’s all out of my system now, no excuses now, this is the perfect environment to focus in, it’s ideal for me. I prefer it coz it keeps me focused and makes feel I’m doing it for a reason. I’m away from my family, I know I’m there for work so I’ve got my work head on, I know what the reason is.

“I had a little conversation with Abel to make sure it was all good to go out there; it was a bit surreal. I just introduced myself and said I wanted an opportunity. Nothing was certain, I had to earn my place for a month.

“You’ve got to survive the training, not many people survive it. You have to prove you can hack the training, and it’s the hardest experience I’ve ever had in my life. It’s more technical training, but it’s also much harder at high altitude, and the amount of training we do, it’s harder in every aspect.”

“You’ve got to survive the training, not many people survive it. You have to prove you can hack the training, and it’s the hardest experience I’ve ever had in my life.” —Ben Hall

The Summit complex in Big Bear, where Hall was and will be domiciled, is hugely impressive. A former construction contractor, Sanchez modelled the place from the ground up and will hope to do similarly with Hall. Set against the backdrop of the San Bernadino mountains and once frequented by the legendary Emanuel Steward, a fabulously appointed subterranean gym sits framed by two large houses, designed for communal living. Fighters come and go, many of them immigrants, all chasing similar goals in the Land of Opportunity. In that way, the house that Sanchez built reflects perfectly the American Dream.

It was Jones, conqueror turned unlikely saviour, who helped liberate Hall from the manacles of his malaise. A warm post-fight embrace inspired a social media friendship that ultimately led to an offer the Essex native could not refuse. While Jones is aptly cast as the loyal friend, he is, at best, a fringe contender in 2017. In new gym-mate and stable star, Gennady Golovkin, Ben has an irresistible role model, a man and professional he can aspire to.

“Golovkin spent 11 months out of 12 there in his first year and he’s got family, he’s got kids, so I plan to follow in his footsteps,” Hall reveals. The din has desisted now, Hornchurch beds down for the night as California bathes alluringly in early afternoon sunlight. “Anything that man does, I’ll do.”

“It sounds as if you’re going to stalk him!” I interject.

“I’m gonna go Shannon Briggs on him!” he responds. I think, hope, we are both joking. “He’s one of the nicest blokes I’ve ever met, but he’s got that aura about him, you only have to look at him to know he’s a world champion. He had a photoshoot in Hollywood, and Abel made me look after his belts, which was lovely [laughs].

He came over and said, ‘Thanks for looking after my belts.’ I said, ‘I’m Ben by the way.’ He said, ‘I’m Gennady,’ and I just laughed; everyone knew who he was. But he was polite, no ego, my sort of bloke.”

“Golovkin spent 11 months out of 12 there in his first year and he’s got family, he’s got kids, so I plan to follow in his footsteps. Anything that man does, I’ll do.” —Ben Hall

Hall is unsure if the two will spar, as the 24-year-old has decided to move down to welterweight. A former Southern Area champion in the division above, Hall has invariably appeared thickset and chiselled at 154lbs, but was at times outmuscled by the aggressive, persistent Jones. A fringe benefit of his new training environment is a tropical climate that actively facilitates weight loss, yet another reason to embrace his new dawn. The change was certainly timely.

“I’ve messed up a bit, done things I shouldn’t do, been places I shouldn’t have gone,” he admits, able now to laugh, albeit ruefully, at his past transgressions. “I went to court in the past, I wasn’t taking school seriously, until recently I’ve not always been doing my runs, although since my last fight I got my act together. There’s always been a stamina issue and that’s coz I was playing around, messing around, and it’s been frustrating for my loved ones. Partying and all that s***, wasting my time. I’ve distanced myself since my last fight, turned into a new man, more mature. I got a bit complacent, a bit overconfident and thought ‘I can do both’. A lot of it was immaturity, me being a total idiot. Some people take a little bit longer to grow up than others.”

Hall for too long thought as a child, until the November defeat at the hands of his future “brother” Jones forced him to finally and belatedly put away childish things. Ailing and injured going into the contest, Hall nonetheless started brightly but was gradually ground down and beaten by the sixth round. It seemed at the time a punishing, perhaps even insurmountable setback but, in hindsight, the stoppage loss was the wake-up call that set him free.

“I shouldn’t have been in that ring,” he notes but there is a total absence of resentment or regret. To rise again, one first has to fall. “I was ill before the fight and I had a bad [right] hand. But I went in, had a go and tried to take him out; for four rounds I boxed alright, I hurt him.

“I don’t think I was ready, I’d been inactive, I had a four-rounder in September then prior to that I’d only boxed in January. To go in with that experience is not ideal, I was getting messed about for the English title, it was a frustrating period.

“Carson has been in the game a long time, he is seasoned. It was too soon for someone like me but I don’t blame anyone, I point no fingers. I blew out of wind, got tired, but for three weeks before the fight I couldn’t train, I had bad flu.

I knew I wouldn’t do 10 rounds so I went out there trying to catch him which is crazy with the experience I had. I wobbled him in the second or third and I thought, ‘I’ve got a chance here,’ but after a bit more time, I thought, ‘He’s not going anywhere.’

But if I hadn’t shown them balls I wouldn’t be where I am now. It sorted out my move to Abel Sanchez so I don’t regret the fight, I feel everything happens for a reason. I gained his and Abel’s respect.  I took a lot from that fight; it’s already the best thing that’s happened in my career.”

That career has already encompassed myriad experiences. Hall represented England during a 35-6 amateur tenure that took in Dagenham and Repton clubs, he fought two ‘semi-pro’ (aka unlicensed) bouts before loud, largely uneducated crowds and is on to his third pro trainer after just 11 fights. Paul Cook, that no-nonsense boxing stalwart, was the first, Peter Sims, who still serves as Ben’s mentor and manager, succeeded him and now Sanchez has assumed the reins. Twists and turns aplenty but Hall regrets nothing. Every move, right and wrong, every choice, has led him here, an East End boy living a West Coast renaissance.

“I was gonna be fighting in June but I done me [left] shoulder and when that clears I’ll get given a date,” he explains, not remotely discouraged by this latest obstacle. “I’ll be fighting in both places, I’ve got some links out there. I’ll fight anyone, I want to get ring time, experience, I’ve just turned 24 so there’s no rush. Ability-wise I’m world class already but I need to get that experience under them lights.”

Hall is in the right place, both geographically and mentally, to attain that seasoning. He has few ties and even fewer inhibitions. Home is where the heart is and Hall has an abundance of reasons to love California.