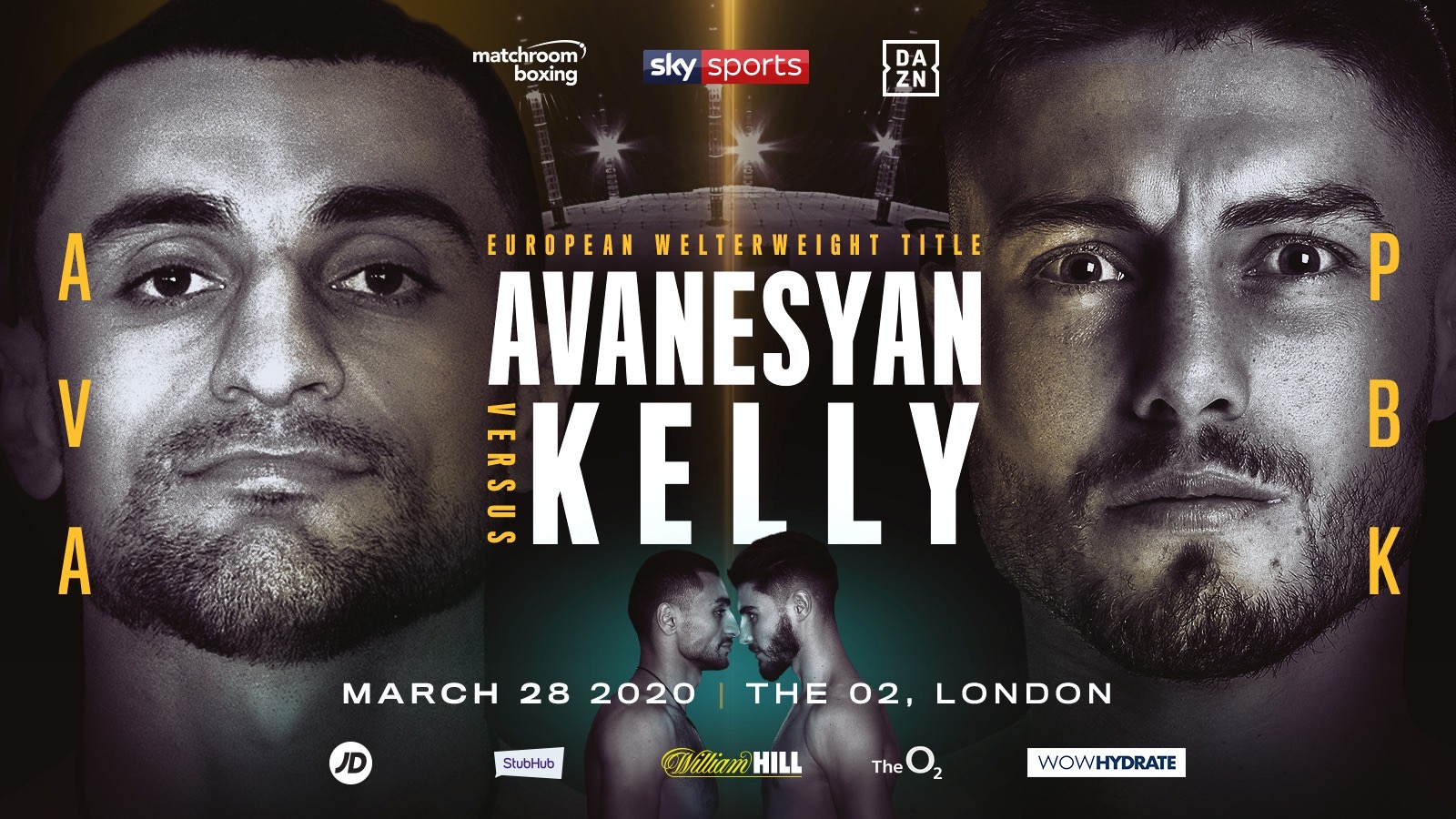 Kelly and Avanesyan to clash in European title grudge match

In a bout that feels an age in the making, it has been confirmed that ‘Pretty Boy’ Josh Kelly will look to take the EBU European Welterweight Title from rival David Avanesyan at The O2 in London on Saturday March 28.

The much anticipated grudge match, which will be broadcast live on Sky Sports, was originally scheduled for December 2018. However, an illness forced Kelly to withdraw from the contest on the morning of the fight, which led to Avanesyan’s manager Neil Marsh branding him a “bottle job”, as tensions escalated between the two camps.

Kelly commented on the bout: “It’s a good opportunity to silence the doubters. He is the favourite now. He has proved how good he is in the last three fights. It’s going to be a good fight, but one I’m quietly confident about.

Russia’s Avanesyan dealt with the disappointment by further affirming his status as ‘the man’ of the European Welterweight scene, ripping the 147lbs title from Bilbao’s Kerman Lejarraga on away soil in March before destroying him in the opening round of their September rematch.

He emphasised: “I have unfinished business with Josh Kelly. I’m delighted the fight has finally been made and I will have a chance to inflict a first defeat on his professional career.

“As the British fans know, I will fight anyone anywhere and I am determined to put a big show on for them in every fight as they treat me so well and I love them.

“After I deal with Kelly I want Eddie to deliver me a World Title shot so I can become a two-time World Champion and secure my family’s future.”

Eddie Hearn added: “This is just a brilliant fight – absolute sink or swim time. Avanesyan is a world class Welterweight who sits in the top 10 with every governing body but for every great Olympic prospect comes judgement day and this is it for Josh Kelly. The fight that could turn him into a real star and a legitimate World Title contender. It’s the ultimate stage, the ultimate test – don’t miss it.”

It means that the 22nd of February will be Lowe’s third consecutive bout in Las Vegas, as he looks to build on a positive 2019 that saw him rack up three victories including a defence of the WBC International title.

Guevara marks a potential step up for the Morecambe fighter, who is a close friend and training partner of Fury. The Mexican boasts strong credentials, having challenged for the world title twice and taken the highly rated Leo Santa Cruz the distance.

Harper gets crowning moment and Brook returns in Sheffield

Following a 14 month spell out of the ring, Kell Brook was victorious in Sheffield on Saturday night as he defeated the tough Mark DeLuca in the seventh round.

The former welterweight world champion grew into the fight and once he found his timing dispatched of the tough American in impressive fashion.

In the chief support bout on the card, Doncaster favourite Terri Harper was crowned the WBC World Super-Featherweight champion, after a hard-fought and masterly win over Eva Wahlstrom.

To read the full report on an action-packed night in Sheffield, Click Here.

Ritson to return in Newcastle

It has been confirmed that Lewis Ritson will return to take on former World Champion, Miguel Vazquez at the Utilita Arena Newcastle on Saturday April 4.

Taking place live on Sky Sports, Ritson will be seeking to build on the momentum of his victory over Robbie Davies Jr last October.

Ritson stated on the fight: “He’s obviously been there and done it and got the t-shirt. He is a world class fighter who has fought at the very top level of the sport and continues to do so, I need to be on my A game to get the win here.

“That’s the sort of fights we need now to get the best experience at that level. Get past Vazquez and I’m knocking on the door.

“Vazquez can do a bit of everything. He’s awkward, he can fight, he can box, but whatever he brings to the table, we’ll have to adapt to that and work out a way to beat him.

“We cannot look past him, there’s a lot riding on it, but if we get the win over Vazquez then it could lead to a World Title shot down the line.”

Dillian Whyte’s Heavyweight protégé Fabio Wardley steps up to take on Middlesbrough’s Simon Vallily in an exciting battle for the English belt.

As well as this, highly rated Glasgow Bantamweight Kash Farooq will make his Matchroom debut as he targets a highly-anticipated rematch with British and Commonwealth Champion Lee McGregor following his controversial loss in November.

Excitement for March’s Midlands card we exasperated this week, as it was announced ‘the savage’ Sam Eggington, would be the chief support on the card.

Taking place on the 28th March at the Coventry Skydome, the bill is headlined by a blockbuster British title clash between Shakan Pitters and Craig Richards.

Bridger revealed that after extensive research and contact with a plethora of managers, he decided to put pen to paper and sign professional terms with the highly regarded Goodwin management stable.

He will be joining the training camp of John Cole in his hometown and will make his debut on 30th May 2020 subject to completing the British Boxing Board of Control application process.

Bridger commented: “I am delighted to be joining the Goodwin team. Steve has shown he is a top-level manager with the number of champions he has produced at all levels and after speaking with many interested parties I felt he was the perfect man to place my boxing future in the hands of.”

Manager Steve Goodwin added: “We are pleased to welcome just a talented boxer into our team of boxers and cannot wait to get started with Mark. I have a lot of confidence in his trainer John Cole and believe we have the perfect set up to guide Mark to the top.”