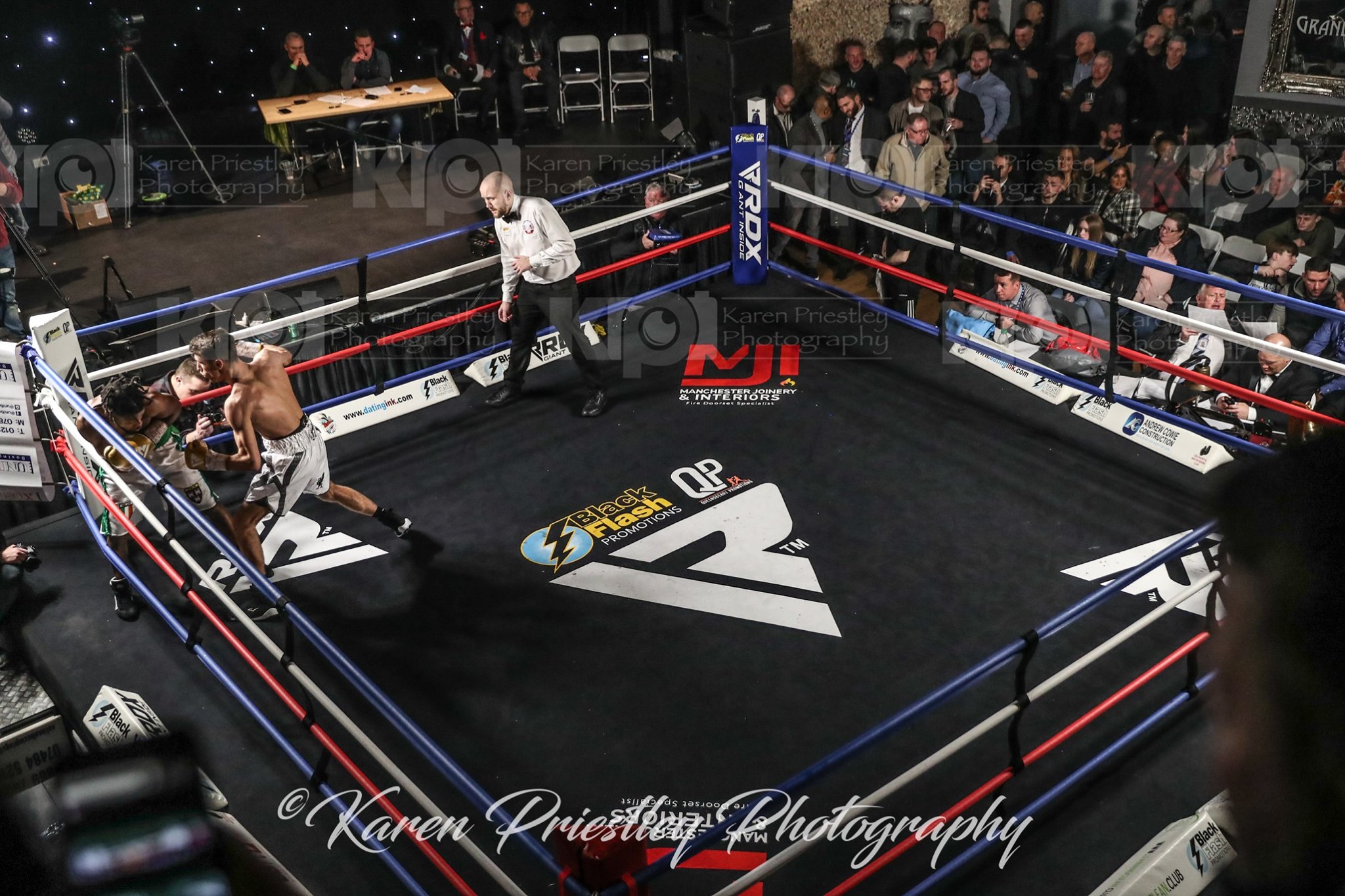 On the eve of our 56th wedding anniversary my wife and I attended this wonderful show, yes we got married in a leap year 29th February 1964. What a wonderful nights boxing the capacity crowd enjoyed.

For myself it was a walk down memory lane meeting so many old friends again Pat Barrett, Gary Thornhill, George Scholfield, Shea Nearly who always said I christened him when I gave him the nomme de ring, the ‘Shamrock Express’ His son JJ James Metcalf who I know from a toddler and that class journeyman John Smith who saved many a show by turning up and boxing the best at short notice and of course my great friend Wayne Smith was on hand.

What a galaxy of stars to have as friend’s, how fortunate I have been on the journey in boxing to have such friends.

First on was a quality 4 round featuring Liverpool’s Jonathan Walsh and Devon’s top class journeyman Chris Adaway, Walsh got the verdict 39-38 in a good contest.

Walsh has a good jab he’s a nice mover but Adaway kept with him and made him fight for every point and proved a worthy foe.

Next up was James Hennigan who out pointed Scott Williams 40 – 36 Henigan has very good boxing ability and throws good combinations of his jab, Williams paid his part in a pleasing contest and fired back when able.

Liverpool’s Jack McKinlay had his work cut out to get the 39 – 38 verdict over Michael Likalu many thought Michael deserved a draw in a cracking bout where both boys matched jabs and combinations to keep the crowd on edge. Both these boys were well schooled and showed good defensive qualities.

Junior Thompson won a 40-36 verdict over Jan Zulguis. Thompson did what he had to do against an opponent who did his best to lure junior into a false sense of security, to bring him on to his counter punches. Thompson would have none of this, kept boxing behind his powerful jab to emerge triumphant.

Next on was a female 4 rounder with Liverpool’s Carly Skelly out pointing vastly experienced Claudia Frenczi by 40 – 36 in a very good contest.

This girl Carly boxes extremely well off her hurtful jab and throws combinations sharp and fast in her style, Claudia needed all her experience to keep in the contest.

Next up was the dreadnought division the heavyweights with Liverpool’s Carl Tierney out pointing ukraine’s Ivan Bezverhyl by the score 49 – 34.

Ivan just could not keep Carl at bay who scored a knock down in round 2 on his way to his shutout win.

Liverpool’s Harry Woods had a great learning bout with one very ring wise veteran Kevin McCauley winning by the margin 40-36 in a bout that Harry controlled of his jab and neat footwork and body movement he showed a poise beyond his experience.

Kevin as usual showed excellent defensive qualities and scored his share when in close in a very good contest that the capacity crowd enjoyed.

Michael Hedges and Lee Connelly engaged in a cracking contest that ended up even Steven with 38-38 a piece hedges opened up aggressively behind his jab and found Lee connelly only to pleased to meet him head on.

Michael fell into the trap as boxing as he was fighting Lees sort of fight. It was a really enjoyable bout that Michael will learn off. Yes Lee connelly never came to make the numbers up.

The same can be said for Brett fidoe who brought the best out of Liverpool’s Connor butler who gained a hard earned 39-37 verdict after four absorbing fast paced rounds.

Butler is a very classy boxer with a cracking jabs and combinations to head and body off his jab. In Brett he was boxing and gave him all he wanted. This intriguing contest was a cracker with prospect butler pitting his skill against the ring wise veteran who did his share of scoring on the counter and boxed well coming forward and on the back foot.

This bout also was very well received by the fans. Connor butler will gain a lot after this bout.

Brad Strand received the 49-36 verdict over Taka Bembere in a bout dictated by the jab and combinations of Brad. Bambere tried to keep up with Brad and realised after the first round he couldn’t. He then tried to frustrate Brad strand however Brad was having none of it and kept to his boxing to earn amorous verdict.

One big statement was made by Liverpool’s Andrew Cain and forced the referee to intervene in the first against the vastly experienced Rafael Castillo.

The speed of his punches of his jab was spell binding, this was poetry in motion. The referee made a timely stoppage after the second knock down. Andrew Cain is definitely a boy to watch.

What a statement James “Kid Shamrock” Metcalf made in his return to the ring after surgery. This was an awesome performance by James on his opponent Jan Balog.

This was another bout when James just exploded poor balog never had chance to settle into a rhythm. Metcalf left his corner and caught his opponent with hard left jabs to head and body then it happened as balog tried to move out of range James threw a brilliant left hook of a hard jab, balogs legs flew from underneath him as the referee counted he tried to rise but his legs would not let him he tried twice to no avail the referee did the right thing and stopped the contest.

Kid Shamrock is some fighter and is knocking on the door for some big fights is he being avoided like his father was?

I was really looking forward to the talented Liverpool boxer Nick Ball’s bout unfortunately his opponent Ivan Godor retired at the end of the first round with an injury.

I was at Nicks debut and tipped him then as a prospect and I have not been proved wrong. He was boxing excellently off the front foot scoring to head and body with his combinations and Godor showed a good defense and tried to counter when he could.

This looked as if it was to be a cameo performance by the talented Ball only to be curtailed so quickly you could only feel sorry for nick as he was clearly disappointed.

So a glorious night of boxing many thanks to all boxers and promoter Pat Barrett and Paul Stevenson for such a great night.